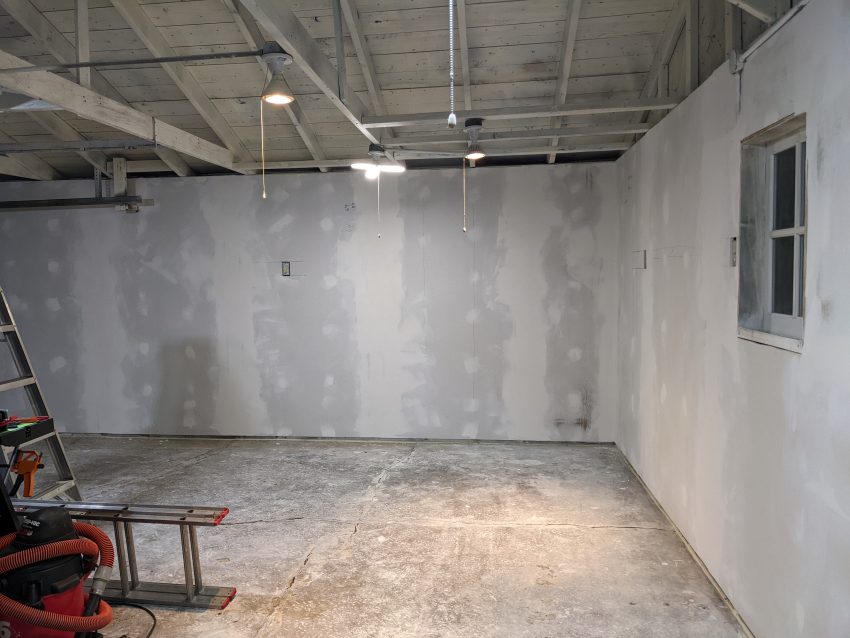 Yesterday we purchased primer, paint and supplies to begin painting this week. Per the carpenters who repaired the wall joists I used Liquid Nails Subfloor & Deck Construction Adhesive to caulk around the base of the floor to help prevent water from seeping in again. Tomorrow the garage door will have new springs and rails installed along with a new opener.

I previously mentioned the fire that led to this renovation. At the beginning of the year I purchased a new CNC (Computer Numerical Control) machine to replace the third generation of home made machines I had built over almost 10 years:

I originally bought plans to build a simple computer controlled router to cut parts and drill holes for cribbage boards. I spent months researching and building it. My past experience with electronics was extremely helpful when it came time to figure out how to make the controller, which interfaced with the computer via a parallel port cable.

It worked well enough, but great precision and speed were not among it’s capabilities, being made of steel rods and MDF. I subsequently rebuilt it (using the first one to make parts) and then a few years later rebuilt it again, along with the controller when I needed a 4th axis to cut turned parts. It worked quite well for a time, but the precision and speed just weren’t what I needed them to be. Also, after a couple of years use the wood parts began to show signs of age as the precision suffered and I was having to make repairs more and more often.

I finally decided to retire the homemade machine and bought a desktop kit from AvidCNC. The controller was also a little long in the tooth, so I got a new enclosure and rebuilt it as well. For several months it was absolutely wonderful. The machine was fast and precise. I think the fatal decision was adding a router control relay module to the controller. When I ran a job I would get the job ready on the computer, turn on the router with a foot pedal then start the job. I would often leave the machine running when I went in the house and check in to turn off the router when the job was done. The module allowed me to simply start the job on the computer and not have to worry about turning the router off when it was done.

Shortly after installing the relay module I had a glitch with a job that caused the router to fall into the workpiece. This happened a couple of times in the past and the worst that happened was the wood it plunged into started smoking. The new relay module had a fuse that tripped immediately (which was good), but I didn’t have a replacement fuse and I couldn’t find one at any local hardware store, so I ordered some from Amazon.

I used a remote control program to monitor the CNC computer remotely from in the house. A couple of days after getting the new fuses I was running a rather long job and keeping an eye on it inside. At some point I figured the job must be almost done and glanced at the monitoring computer. The remote control program was frozen, and figuring it was due to a network problem I went out to check on the job. When I opened the garage door black smoke poured out. It was impossible to enter and I had to call the fire department. They promptly showed up and put out the fire before the rest of the garage went up, but the CNC machine was toast.

When the smoke literally cleared it was obvious the main problem was the router had once again plunged into the bed of the machine. Not only did a small fire start where the router was buried, the controller itself caught fire and likely created most of the toxic soot that filled the garage. The best I can figure is the new fuse did not trip and caused a short that sent the controller up in flames. Bad fuse? I’ll never know as it was obliterated.

In the days to follow I lost a lot of sleep. The worst issue was that in a few weeks I would be attending my very first dollhouse miniature show as a dealer. A number of plans had to be scrapped and I scrambled to get everything finished without a workshop. Great thanks go out to my friend Bob, another woodworker, who let me use his basement workshop to complete a couple of necessary projects.

I’m lucky to have a good home insurance company that is covering most of the costs of replacing and rebuilding. I’m getting a new CNC machine, but this time the controller will be from Avid as well, instead of making another homemade one. The new machine will have all the safety features that should prevent this from happening again. I’m planning on also getting remote surveillance camera and a smart smoke detector that can notify me via text if there’s a fire. I’ve also replaced all the original outlets with GCFI ones that protect against electrical shorts

I went through the usual stages of shock and grief over this incident, but now I am excited over the possibilities of a brand new and better planned workshop.

2 thoughts on “Garage Progress – And How it Happened”